If you can’t choose your family, then who do you choose?

This week I was asked to prepare a talk for a group of disability and development students on the subject of “Disability within the Family” (or there abouts). The Professor, a friend of mine, said she thought of me because she had read my book “Road to Damascus”, and figured a personal account would be just the ticket.

“Hum, I don’t know,” I was thinking, “my experience isn’t exactly text book stuff.”  Most health students I’ve come across want facts and figures with as little personal engagement as possible.  I should know, I lived with four when I was in university and as I recall, developing a bedside mannar seemed to be way down the module list, if it put in an appearance at all.

Pondering the task ahead as I sat on the loo (I often get my best ideas from this position) I decided that if it was the personal touch I was aiming for from these health students, I would have to give them the personnal touch… and the only way I was going to do that was to read them extracts of my book and get them to talk about them. A daunting prospect in any respect.

Of course, the first thing I will have to say to them is that I use the term ‘family’ very loosely in my book. If my audience are expecting a ‘how to’ for parents and siblings on living with disability within the family, then they may as well head home. 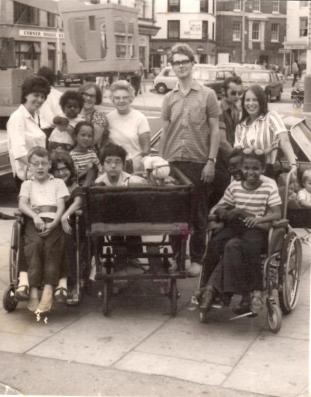 My family was a multi-racial collection of boys and girls and houseparents. We were on a holiday on the Gower Coast in 1970. I’m the one in the black barrow and the monkey was an unwelcome intruder that had just bitten me, hence my rather glum appearance.

Mine was not what you would call a traditional family upbringing.  Developing sibling relationships with other members of my ‘birth’ family was not an option for me and therefore much my of my ‘experience’ was either imaged or not encouraged at all and grew out of a 1960s social care system. It was only put into practice many years later when I did finally meet my birth family.

Although a children’s home is not the ideal place in which to have a childhood it did provide no end of ‘family’ in which to learn the hard knocks of family relationships.  Houseparents became mum and dad, mostly mums it had to be said as houseparents were invariably female, and fellow residents became brothers and sisters. They say, “you can’t choose your family…”, and never was this truer than in a childrens home ‘family’ group.

Thus, it is from this perspective that childhood anxieties such as coming to terms with being different, competition for attention, confinement (physical and enforced), and inability to join in ‘family’ activities were played out for me. Not being an expert by any means, I suspect they wont be much different from issues a child without an impairment faces.  Lets see what my Professor friend’s students think of that.

Writer, photographer, filmmaker and general vagabond whose committed to inspirational stories and the art of influence.
View all posts by jazz64 →
This entry was posted in Uncategorized. Bookmark the permalink.

1 Response to If you can’t choose your family, then who do you choose?