A Name To Be Proud Of 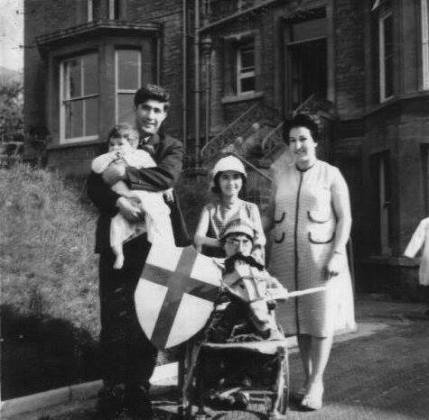 A rare photo of all the family taken in 1964 at Penhurst School, Oxfordshire where Nabil and I spent our childhoods. (Nabil as King George in the middle, Suzan behind, Ahmed in Father’s arms and me hidden beneath mother’s dress)

More often than not in the Arab community, despite a parent’s best intentions, the delivery of a baby girl, regardless of her health or beauty, can be cause for great disappointment to a family eagerly awaiting a birth.  One boy amid a gaggle of girls could be the difference between being divorced and public disgrace, and a life of relative plenty respected by all those around you.

First borns of either sex are generally named after their grandparents.  Our family, being fairly non-conformist didn’t follow that tradition.  As far a I can recall there is no one in the immediate family called Nabil or Suzan. Nabil means ‘noble’ and was given to my oldest brother.  To my mind, a wise and considered name accorded by parents who were clearly delighted to have their first born –  a boy.  Suzan too loved her name.  Although officially spelt Souzan.  Suzan claims, that she was named after one of our father’s former girlfriends.  She couldn’t say whether the girlfriend was pre or post-marriage to our mother but, if true, it would explain why Suzan felt no mother/daughter bond existed between them.  As second born son, Ahmed meaning “to be praised”, was a fitting name for another boy who had again blessed the family.

I, on the other hand hated my name, and it had nothing to do with being the youngest girl. Said to be named after the feisty, go-getter, courtesan in the 1958 film, Gigi (‘Jigi’ if you spell it the Arabic way) my name soon became a millstone around my neck.  I had nothing against the film itself – a bit schmalzy for my liking – but a classic nonetheless.  Whether my parents were bestowing a character preference from a much loved film they saw together during their heady days in 60‘s London before my father died, or if it was just a random name hastily tossed in my direction during a crisis, I am unlikely to ever know.

Whatever the true intentions behind my naming it was its pronunciation, or rather its mis-pronunciation, that became a source of great irritation for me as I grew up. ‘Gee-gee’ and ‘Igig’ being the most contemptuous, and coming from a film that won nine Oscars, including Best Picture, I felt people should at least try to make the effort.  Needless to say as soon as I was old enough to do something about it, my name was ‘amended’ to something far more to my liking, not to mention, easier on the vocal cords.

I liked ‘Jazz’ because it sounded cool.  It’s as simple as that.  I wanted to mark my first trip to Jordan as a post-teenage butterfly who was answerable to no one.  Finding solace under the shade of a beautiful Jasmine tree that grew in the corner of my paternal grandmother’s garden, it provided both comfort and shelter amid what had been a chaotic trip to see never-before-seen family.  Tata Fakhria, as we called her, tearfully told me that my father had loved that Jasmine tree and would sit beneath it on his final visit before he died.

True or not, Tata had provided a happy, if not convenient, compromise to epithet dilemma which had dogged me all my life.  By the time I boarded the plane back to the UK I had reinvented myself.  I just hoped my father was pleased with my choice.

Writer, photographer, filmmaker and general vagabond whose committed to inspirational stories and the art of influence.
View all posts by jazz64 →
This entry was posted in Uncategorized. Bookmark the permalink.

3 Responses to A Name To Be Proud Of